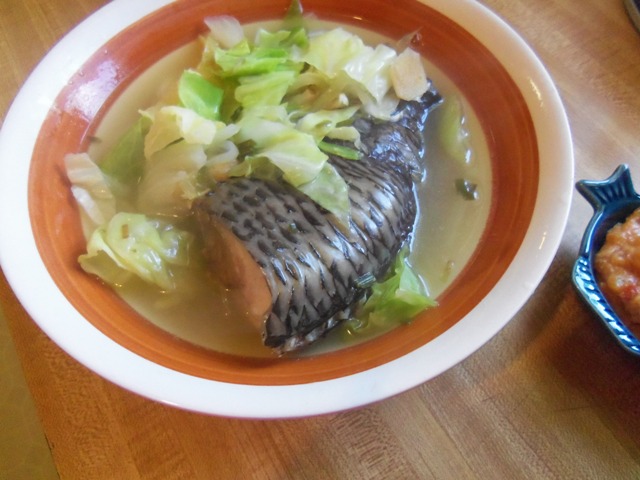 A friend cooked this for me once when the only Filipino fish soup I knew was sinigang. I thought she had forgotten the souring agent but I was wrong. For those who do not like the sourness of the ubiquitous Filipino sinigang, this is a nice, mild alternative. It is delicately spiced like your grandmother’s tinola (or chicken soup) and actually, it is exactly the same as chicken tinola except that you use fish instead.

When I saw the Pesa recipe on the Overseas Pinoy Cooking Blog, I was immediately intrigued not to mention hungry! I just had to make it and luckily, I had one leftover tilapia in the freezer. I felt a lunch time soup coming on. Yes, even when it’s ninety degrees and humid outside, I craved to have this soup.

Print
Pesang Isda - Fish in Ginger Soup
Prep time:  30 mins
Cook time:  30 mins
Total time:  1 hour
Serves: 2-3
Ingredients
Instructions
Notes
I used cabbage for the vegetables in this instance because that's what I had in the refrigerator at the time. Any green leafy vegetables like bokchoy, napa cabbage, spinach or tender mustard greens will be perfect for this dish though. Also, in the original recipe, regular onions were also used in addition to the leeks. I happened to be out of onions too, so I used leeks that I pulled up from the garden instead.
Wordpress Recipe Plugin by EasyRecipe
1.2.4
BY THE WAY, if you look at the original recipe, it was recommended that this dish be served with a miso dipping sauce. That’s what’s in the smaller dish in the photo above. I must say, that ‘dip’ is perfection! Recipe for it will follow.