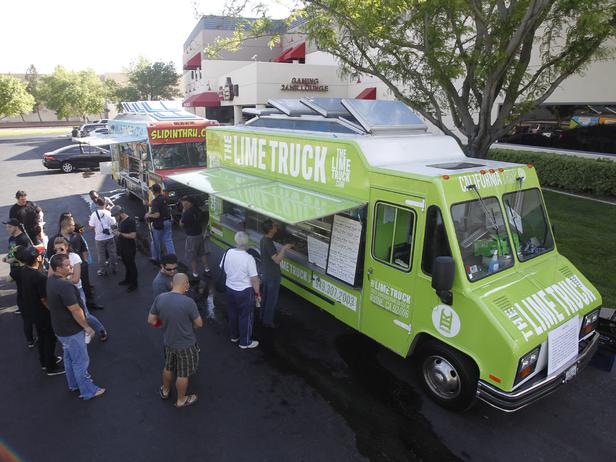 Food Truck Hopefuls Hit The Highway For Third Season Of The Great Food Truck Race on Sunday, August 19th on the Food Network. It’s one of the few reality type food shows that I watch just because I have become so enamored with food trucks!

I remember a time when I wouldn’t go near a food truck! When I was growing up, food trucks only went to construction sites and their food was awful, not to mention unsanitary as my mother liked to point out. She used to say, “Look, most of the workers are usually men, and they can’t have a good supply of running water to wash with in those trucks!” Then you would hear on the news about people getting sick from food trucks. So for the longest time, I didn’t go near them.

After I got older and got more adventurous, I tried a few of them and learned, there could be some good grub off of these trucks! But it wasn’t until the recent craze about food trucks started that I really started paying attention to them again.

For my daughter, it started with Twitter. She found great fun in following local food trucks on Twitter, find out where they’re parked that day, then beg me to take her there. Genius marketing, if you ask me!

I soon discovered that with all the attention, food truck fare has gotten even better. The first food truck my daughter took me to was a burger & fries type of truck. Nothing unusual. But then we discovered the Korean bulgogi truck, the Indian food truck, the Mexican taco party bus, and so on. The one we haven’t found here yet is a Filipino truck. My daughter has tried the one in L.A. where she is now, and she’s raving about it. I’ll have to take note to find that truck next time I’m in California.

One of the regular shows I look at on the Food Network is the Great Food Truck Race and it is getting ready to start up it’s third season on August 19th with host, Tyler Florence. Based on the previews I’ve seen so far, it looks like the caliber of food truck fare will again be challenged and elevated. The race will start out in Long Beach, CA and end at the Quoddy Lighthouse in Maine.

Interestingly enough, I heard on the news this morning that NC food truck operations will now be required to display grade cards just like restaurants. That makes me feel good to know that they will now also be subjected to the same regulations and inspections as restaurants.