Although it was scorching hot and humid outside, we couldn’t resist having one of our favorite soups, oxtail soup. The weather has never been a hindrance to our enjoyment of soups. Why whenever we are in Las Vegas, we must have our dose of Oxtail Soup at the California and you know how hot it gets over there!

The last time we were in Las Vegas was last summer. It had been several years since we were last there, but since my mother decided to retire and moved there, we decided to go check out her new house and also get re-acquainted with the town. My, have things changed! When we used to go there as kids, there was little for us to do aside from hanging out at Circus Circus. Nowadays though, even with six kids in tow there was plenty of things to do in Vegas. The girls were not bored for one second, and it was painful for them when it came time to leave.

Of course while we were there, we had to work in a midnight run to the California hotel just to have their oxtail soup which they don’t start serving until 11 p.m. for the night owls, the gamblers, the hung over and the plain obsessed like us. The late night service is one reason my daughters have yet to sample the oxtail soup at the California. My mom, my sisters and I don’t mind the late hour, we actually like it better because as anyone knows, it’s hard enough getting around Vegas much less downtown Vegas during the day. Late night traffic is much more manageable.

This was the last bowl I had at the California. See all the grated ginger and chopped cilantro floating about? It’s making me hungry just looking at it again. 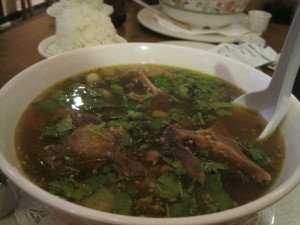 The way my sisters and I talk about the soup, it’s no wonder my daughters have been hankering for a taste too. So a couple of weeks ago when we chanced upon some good-looking oxtails at the grocery store, my daughter immediately requested for soup.

This time though, I didn’t put the usual aromatics that normally flavors the Hawaiian style soup served at the California. I made this one Nilaga style. Nilaga is the Pilipino term for boiled and is a general term applied to a lot of boiled soups in the Philippines. What sets it apart from the Hawaiian version is that it doesn’t use as many spices as the Hawaiian version, depending instead on the strong beef flavor that oxtails impart. It is a much lighter broth but also very good at highlighting whatever vegetables you choose to have with it instead.

Print
Nilaga: Oxtail Soup with Potatoes and Vegetables
Author: Jeanette
Recipe type: Main, Soup
Prep time:  30 mins
Cook time:  3 hours
Total time:  3 hours 30 mins
Serves: 5-6
This soup is good enough and hearty enough for a main meal but the broth is also flavorful enough for a starter soup with any meal.
Ingredients
Instructions
Notes
You can use any vegetables you want in this soup. Some suggestions: Cabbage Carrots Celery Green Peppers Green Beans Turnip Roots or any green, leafy vegetables (turnip and mustard greens work well too) You can also use other cuts of beef instead if oxtails is not your thing. I have used beef shortribs for this recipe and traditionally beef shanks is used for Nilaga. The main thing when making this soup is to use meat on the bone. All the good beefy flavor comes from the bones.
Wordpress Recipe Plugin by EasyRecipe
2.2.8