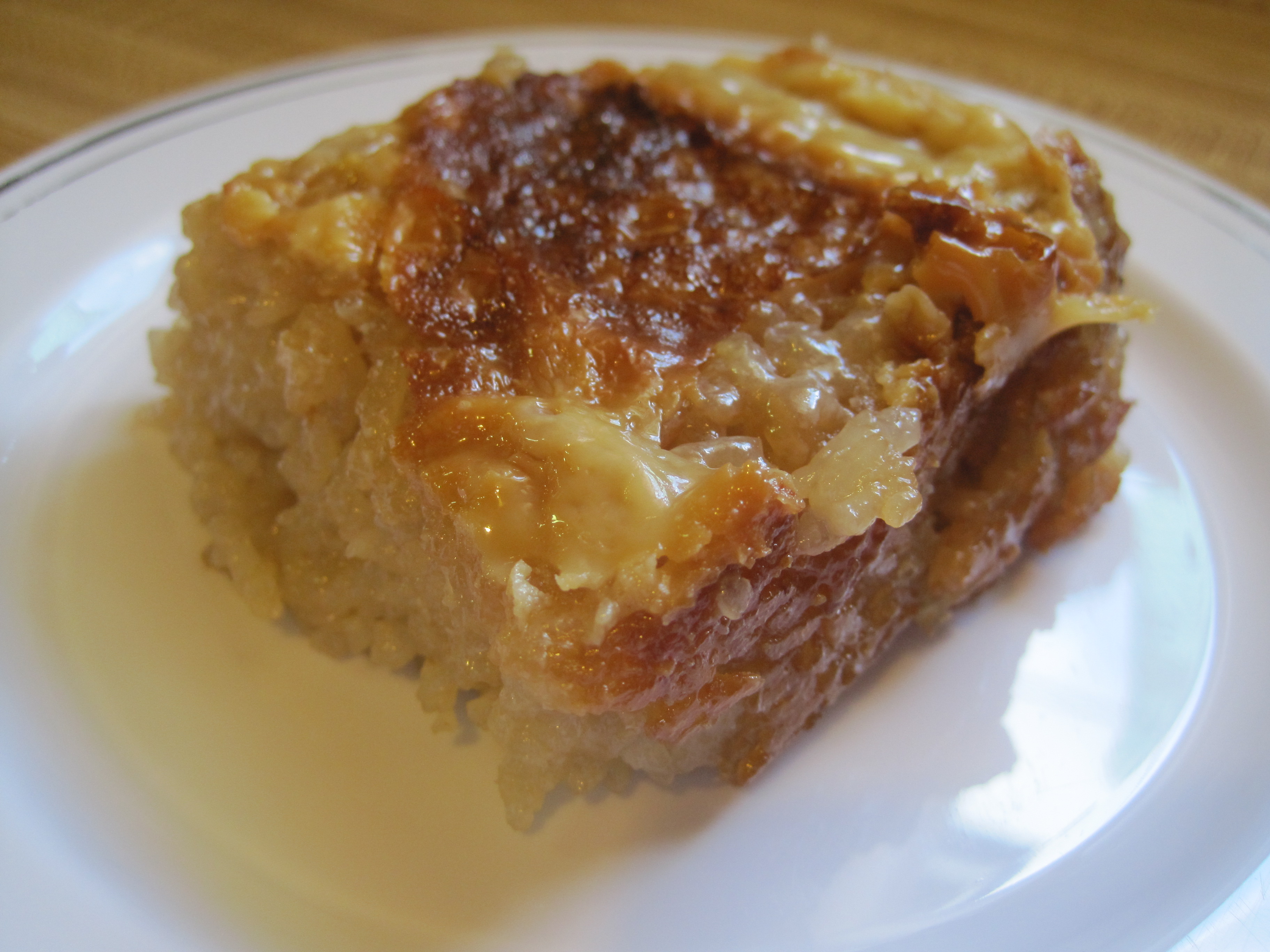 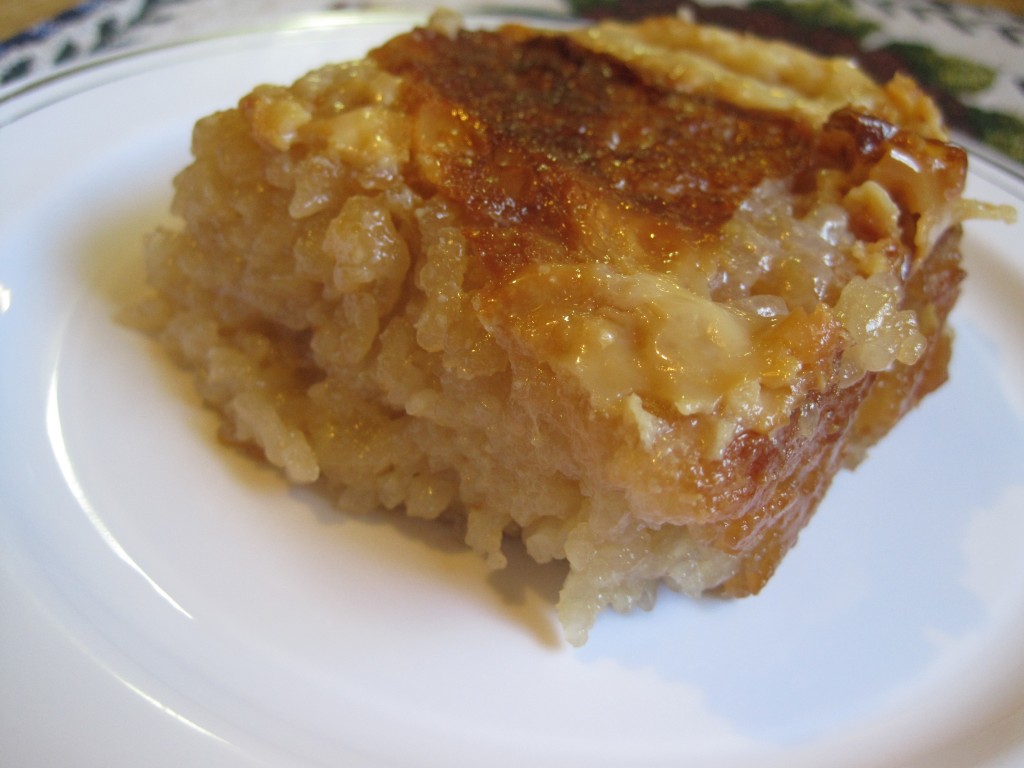 I tried out the a new shortcut to an old bibingka (rice cake) favorite today and I must say, it didn’t turn out half bad at all! This glutinous rice cake is called Bibingkang Malagkit in Tagalog but in Ilocano, we usually call it Inkiwar which roughly translates to ‘something stirred’.

When my grandmother used to make this rice bibingka, it usually involved a long arduous process of grating the coconut, extracting the coconut milk and then spending an inordinate amount of time stirring the mixture over a hot stove, the effort to stir becoming more difficult as it gets thicker and stickier. Thus the name, inkiwar or stirred. My aunts who were tasked to do the stirring always complained of sore arms afterwards!

Well, you won’t find that here 🙂

Here is a shortcut, a variation to my previous post of this sticky rice cake, that I just came up with this morning after seeing my friend Sha’s post on facebook of her biko (another term usually applied to this type of bibingka). 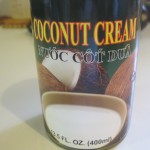 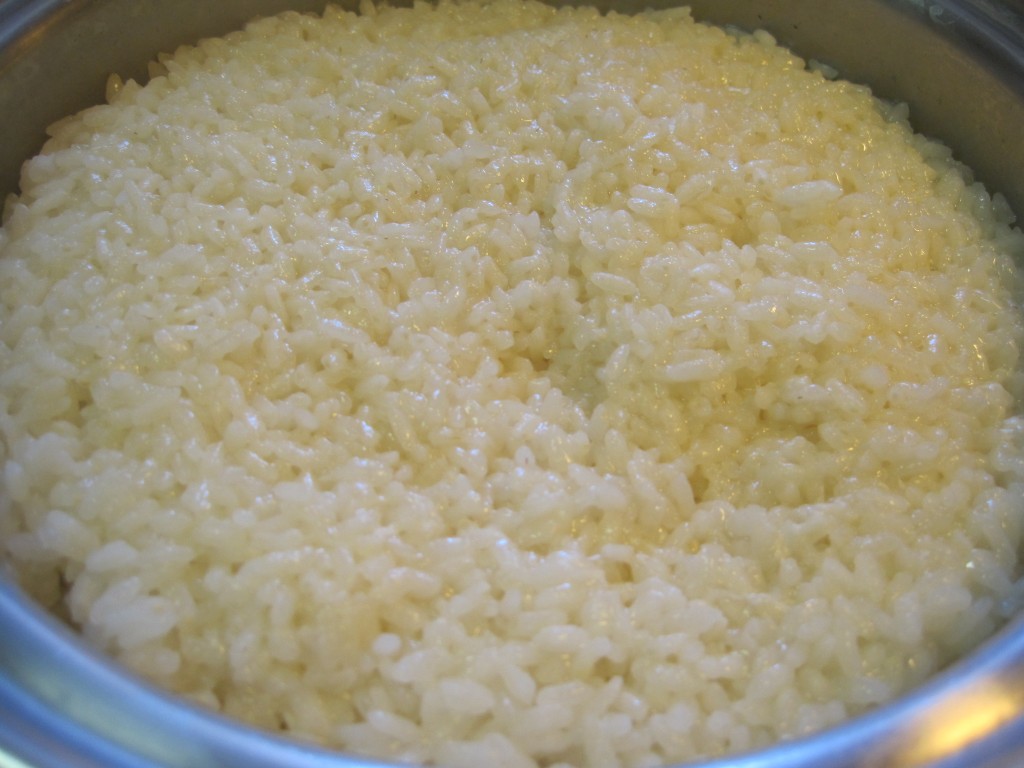 By pre-cooking the rice, you cut down on the overall cooking time. The traditional way of cooking this rice cake would have been to cook the rice in the coconut milk and sugar mixture, thus the constant stirring required so as not to have the coconut milk separate and/or the rice stick to the pan. I added the salt because my that’s what my grandma used to do, but it’s also to counter some of the sweetness later on. The virgin coconut oil, I added for the aroma and flavor and because I still have a jar of it in the cupboard. The oil is optional if you don’t have it. 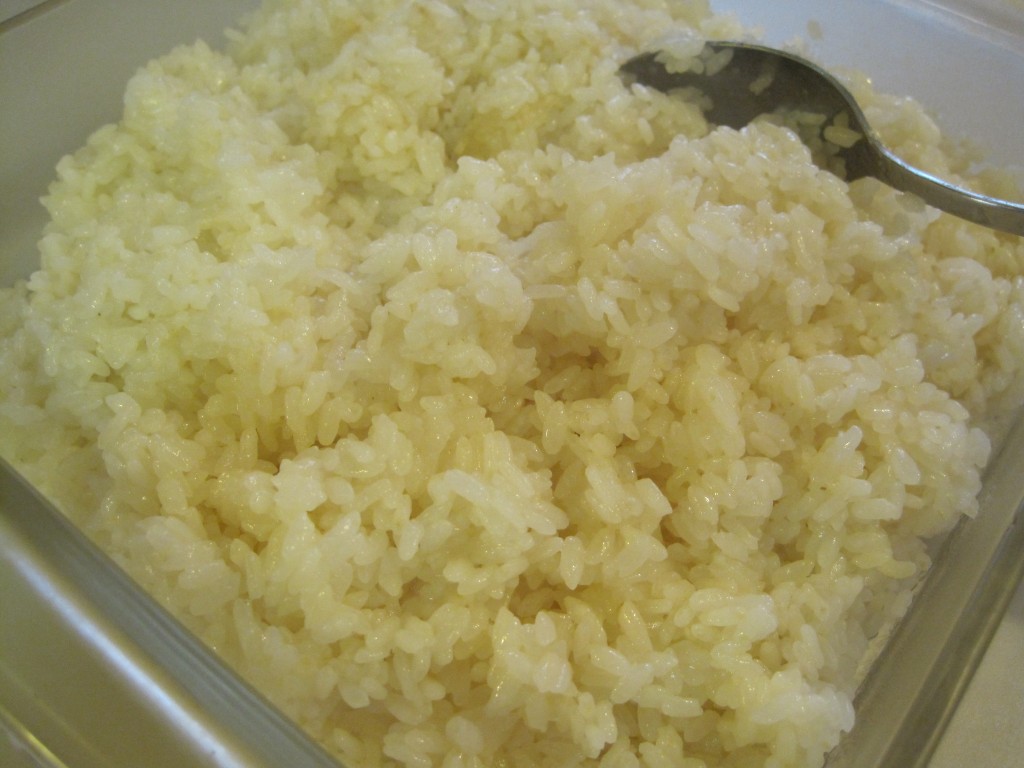 If you noticed, I pre-cooked the rice in only two cups of water. That’s because you don’t want to cook it all the way just yet. You wan’t to cook it only part way or al dente if such a thing applies for rice. Transfer the rice into a baking dish, which in this case, I used a 9×9 inch square Pyrex dish. 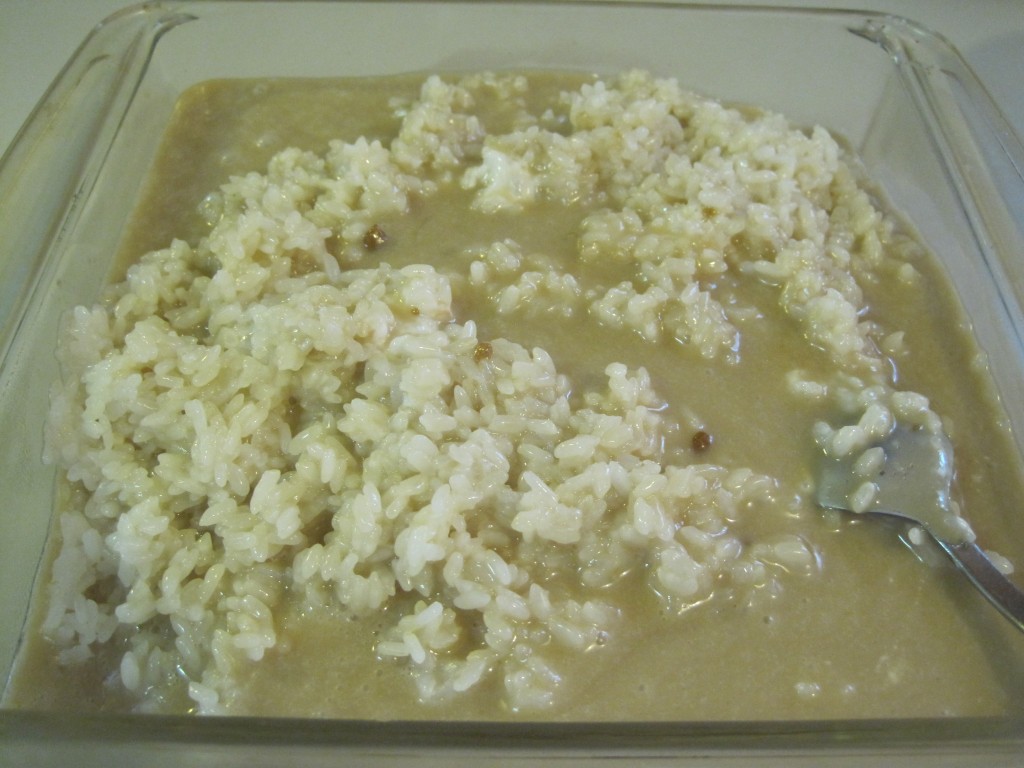 I only had the light brown sugar so you can see how pale it is. Next time, use the dark brown sugar or add a tablespoon of molasses for a richer flavor. I didn’t have either of those this time. — Pour the sugar and coconut cream mixture over the rice… 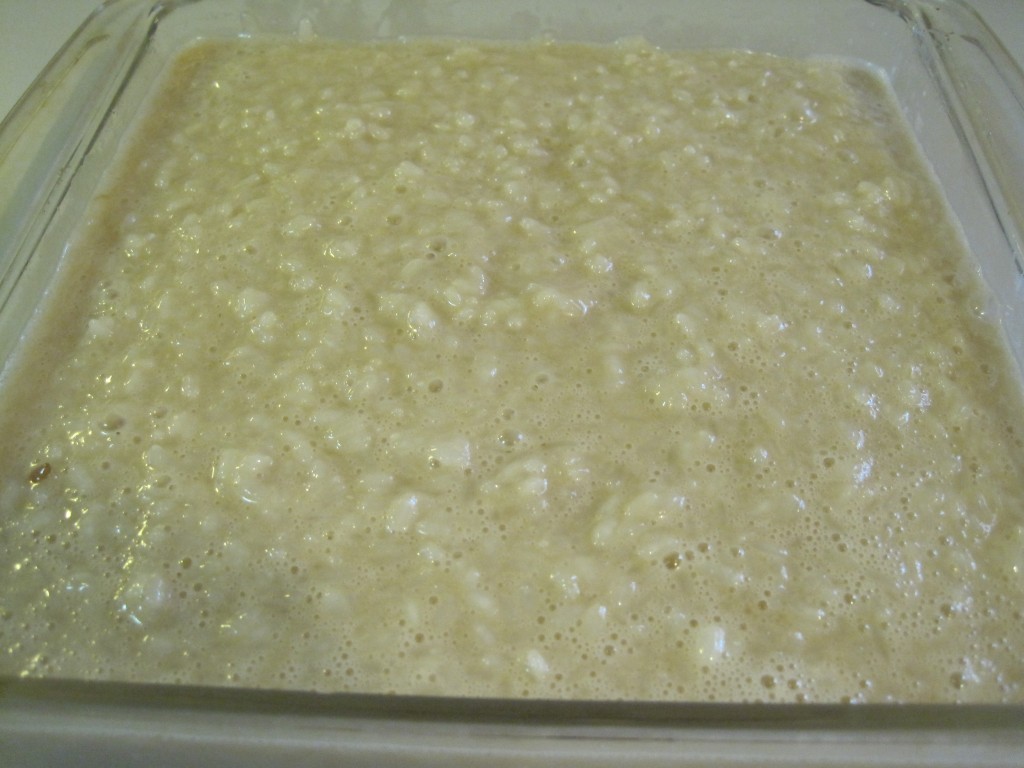 and mix well until you have no lumps. Put it in the pre-heated oven and bake it for about 50 minutes or until it is browned at the edges. 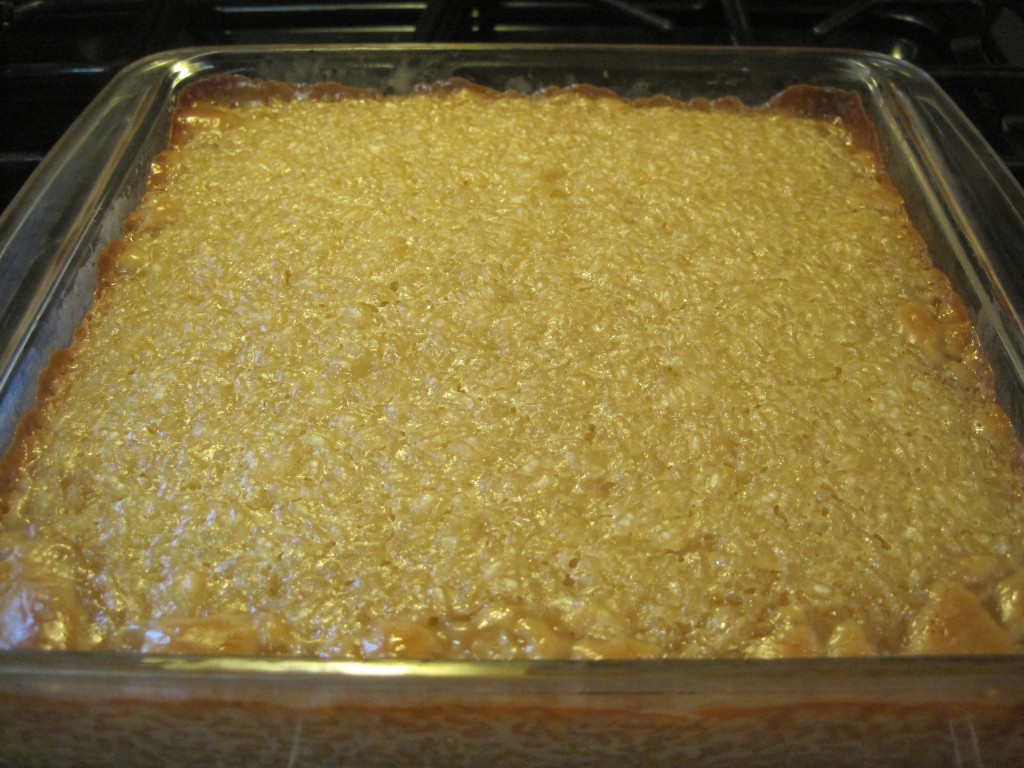 When it looks like this, you can stop here and it’s good to go. But I wanted a sweet sticky topping so I went a step further… 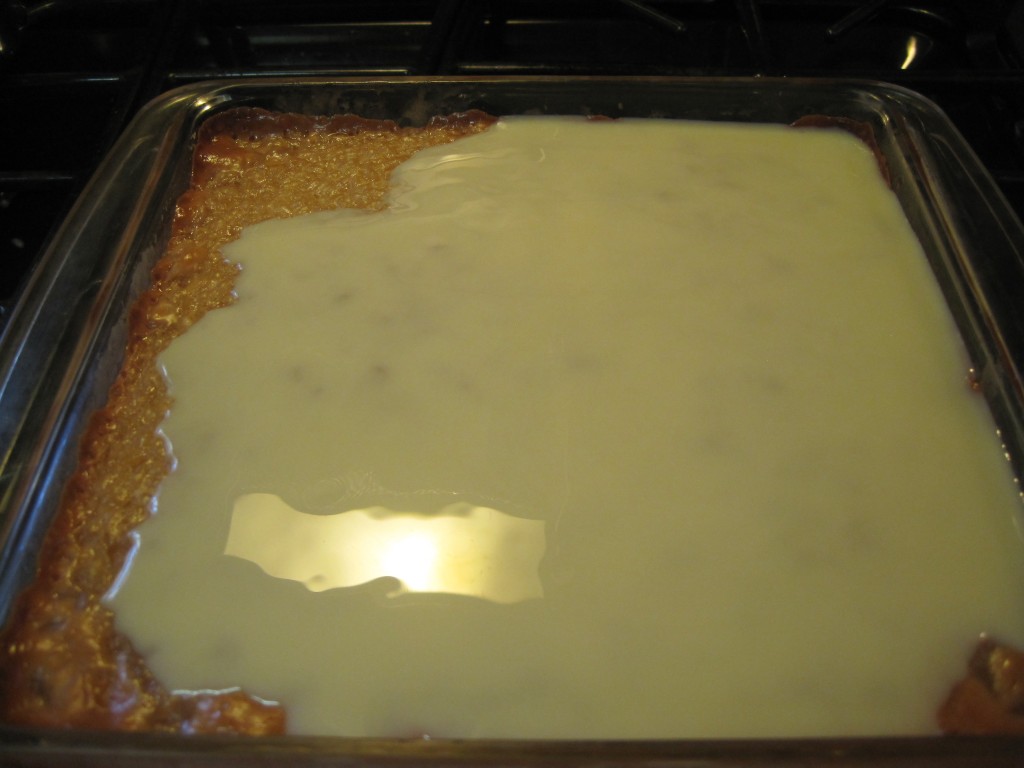 Pour a can of condensed milk over the top and put it back in the oven for another 10-15 minutes until the top is bubbly and caramelized. 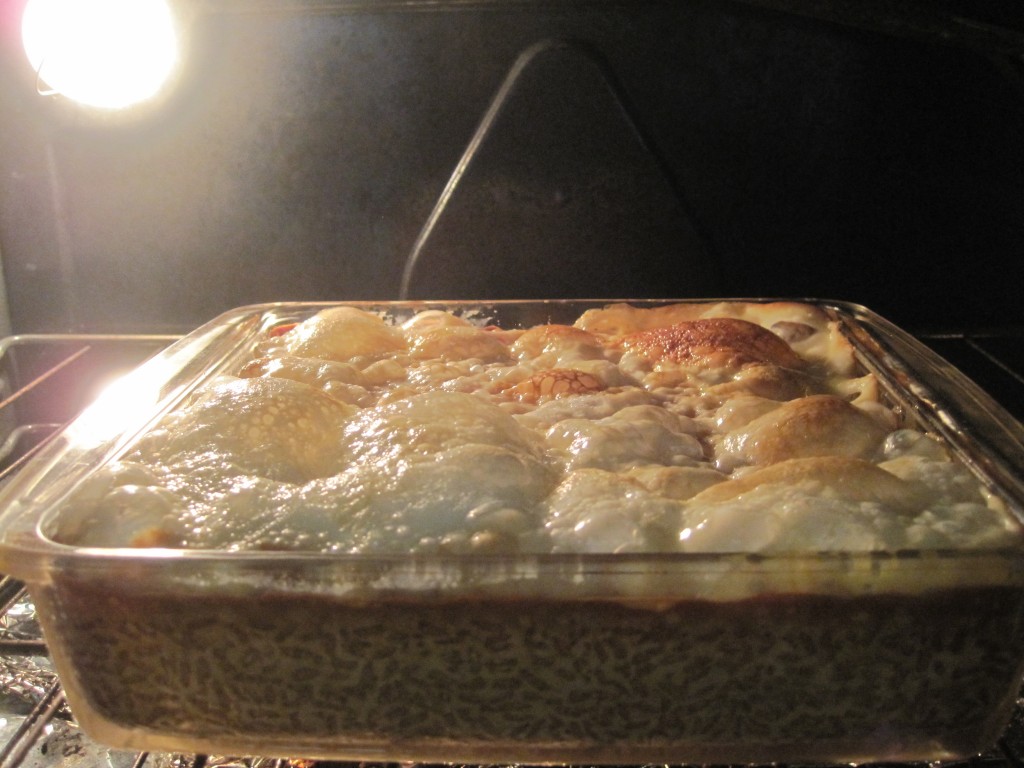 I couldn’t resist taking a photo while it was all bubbly in the oven! But you can tell how my oven is heating up unevenly because the back part is already browning but the front is still looking pale. It probably didn’t help that I kept opening the oven to check it out. lol!

When the condensed milk has caramelized, take it out of the oven and let it cool before cutting into it. For me, the best part are the corners and edges where it is almost crusty and a bit chewy. I let the kids have the soft, crust free center slices. They don’t know what they’re missing! 🙂