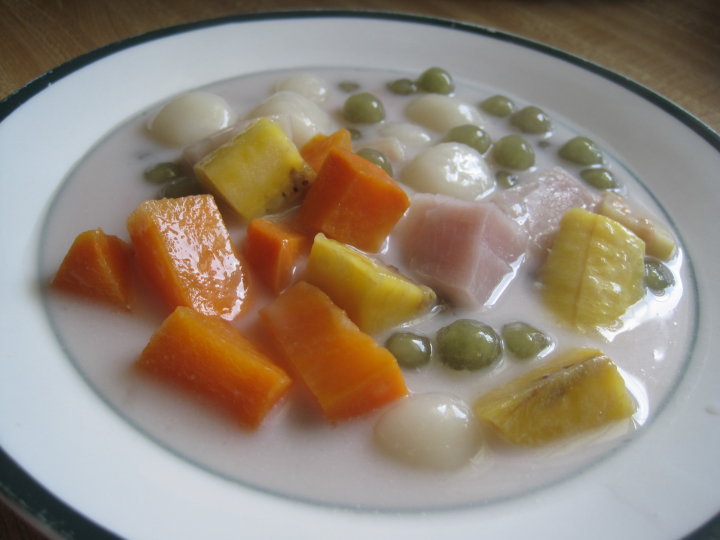 Whenever my family made this Filipino dessert, they just called it Guinataan and we all knew what was coming. When I published my original post on Guinataan on this blog years ago, I received several comments correcting my nomenclature and to an extent they were right. Ginataan is a general term to describe anything cooked in ‘gata’ or coconut milk. So since I am updating this recipe with a better photo, I thought I would also be more specific with the title also using my daughters’ name for it, Coconut Soup.

The girls and I had a cooking spree yesterday, each of us cooking a dish. The Clone made pizza from scratch, Jade made a delicious sesame chicken, and I made a roast pork. We now have enough food so that we won’t have to cook for days! That’s always a good thing in our house since I don’t normally get home from work until six p.m. or later.

Well, I had a big slice of pizza while it was still hot from the oven and I wasn’t hungry anymore come dinner time. But, I stayed up late last night and right around midnight, I started to get hungry. I could have gone to sleep which is what I usually do, but instead I decided to have a snack. That’s when I remembered that I still have some rice cake (biko) in the refrigerator. I decided I better have some of that before it goes bad. It was looking a little sad and dry though, so I decided to warm it up the way my grandmother used to warm up suman (banana wrapped rice cake) by frying it in butter and sprinkling sugar over it.

This is what I had at midnight last night, and it hit just the right spot! What do you like to snack on late at night?

Have you ever found yourself wanting two things at the same time and wish that you could have them both? Well, in cooking you can do that! 😉

That’s what happened a couple of weeks or so ago when, while perusing my friend’s updates on facebook, I saw that she had made this yummy looking cassava cake. It looked so scrumptious, I wanted to lick it right off the computer screen! It helped that she’s also an awesome photographer, you understand. She’s been known to stir up intense cravings just from her photographs and musings of food. Well I wanted that cassava cake! I also wanted it the way she made it which was with small pieces of diced jack fruit. She said it just made the whole thing so fragrant. I could almost smell it just from looking at her photo. I wanted it bad!

So off to the pantry I went, searching for the ingredients to make myself a treat. Really a bad idea when you’re hungry. As I stood there, rows and rows of canned and dried goods lined up in front of me wanting to be made into something delicious. I kept getting distracted thinking…

“maybe I should make some cupcakes instead…”

“Beans? I should make some chili.”

“OH, I had forgotten this jar of Nutella back here…”

And so it went, but I pulled myself together and concentrated on what I went in there for in the first place. Stuff for Cassava Cake! I needed canned milks: evaporated, condensed and coconut. Check! Then I went to the freezer to pull out the frozen grated cassava….. I only had one pack! Half of what’s called for in the recipe! Well, I thought to myself, I’ll just make a half batch since I will probably be the only one to eat it anyway.

Then I turned around and spied, in the pantry, a half used bag of glutinous rice flour, left over from when my daughter and her friends made mochi. My mind immediately said, “mochico cake!” “But I was already going to make Cassava Cake!”, I answered. But I oh, so wanted both of them then. I could smell them baking and turning beautifully brown as they baked. I can imagine their gooey lusciousness on my tongue! Right then and there, I decided, I knew I had to have them both. I had to. I couldn’t help it. Well, I could have helped it, but I didn’t want to. I just wanted to eat! So I cooked, and here’s how I did it.

END_OF_DOCUMENT_TOKEN_TO_BE_REPLACED

Because we’ve been enjoying the virgin coconut oil that we received from Tropical Traditions, I have been using it in almost every dish I cooked in the last week or two. This is one dish that was quickly put together on a weeknight and a delicious change from our usual stirfry dish. You can taste and smell the coconut oil but it’s not overpowering. It’s just the right balance to make you think about what that different flavor is.

If you’d like to try some virgin coconut oil, make sure you enter the Virgin Coconut Oil Giveaway on my review blog, Found Not Lost.

END_OF_DOCUMENT_TOKEN_TO_BE_REPLACED

One of the greens that I absolutely love is sweet potato leaves. If you’ve never tried it, I definitely recommend the young leaves from a sweet potato plant. This is the sole reason that we even bother planting sweet potatoes in our garden.
So when I received a jar of virgin coconut oil to sample, I decided, why not marry the things I love together? So this simple recipe came about and not only is it packed with awesome flavors, it just has to be good for you. I’m not a nutritionist, but what with the green potato leaves, garlic and coconut oil, this dish has to be packing some major vitamins.

If you can get your hands on some tender sweet potato leaves, then the rest is easy. You can even win a jar of the coconut oil from my review site. I am giving away a 32 oz. jar of Tropical Tradition’s virgin coconut oil on my review site. So get on over there to enter!

Now for the recipe, here you go…
END_OF_DOCUMENT_TOKEN_TO_BE_REPLACED

We had this as a quick weekday meal last week. Whether you have it over rice or noodles, it’s delicious in either case. I also realized, just before I started cooking, that I was out of coconut milk which is what I usually use when I make chicken curry. Even without the coconut milk, it was still delicious. The family decreed that it tasted different but was just as good.Having it over rice noodles is what made this dish special. The green beans and the summer squash were from our garden.

Also, when I cooked this dish, I made double the proportions provided below because I wanted to have enough left overs for another meal. We had curry over rice the next time around and it was still delicious.

END_OF_DOCUMENT_TOKEN_TO_BE_REPLACED 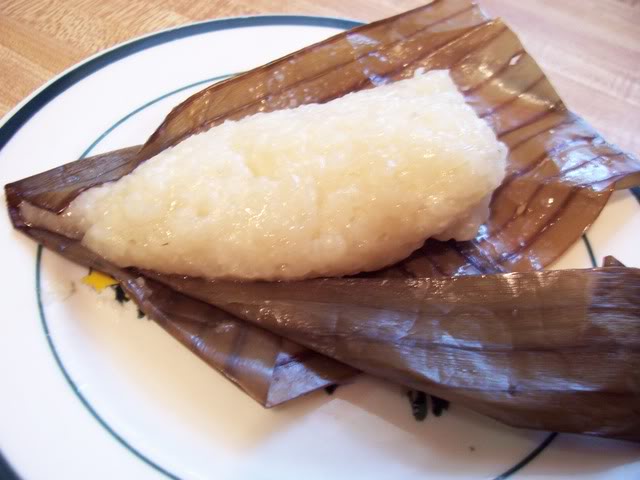 Here is a photo of my lola with the recipe following. My recipe that doesn’t come close to hers but is good enough to keep her memory alive.
END_OF_DOCUMENT_TOKEN_TO_BE_REPLACED

My gosh, I think I can blog again! Some people blogged all through election night but I couldn’t do anything all night but stare at the TV; first, holding my breath and waiting for the results then when it came, just sitting, stunned that we have a new president and the first black president at that! What a night!

Our host for Recipes to Rival for October were Rayrena of Happy Cows and Belita of Culinary Adventure and they chose BEEF RENDANG for this month’s challenge. Here’s another recipe that’s been sitting in my ‘to-cook’ list and I finally got a chance to cook it. So I actually had this cooked up a couple of weeks ago and I really thought I’d have it all written up and scheduled to post on time, but, you know life… it just likes to mess with you that way. So without further ado, here’s the recipe and my thoughts (in red).
END_OF_DOCUMENT_TOKEN_TO_BE_REPLACED